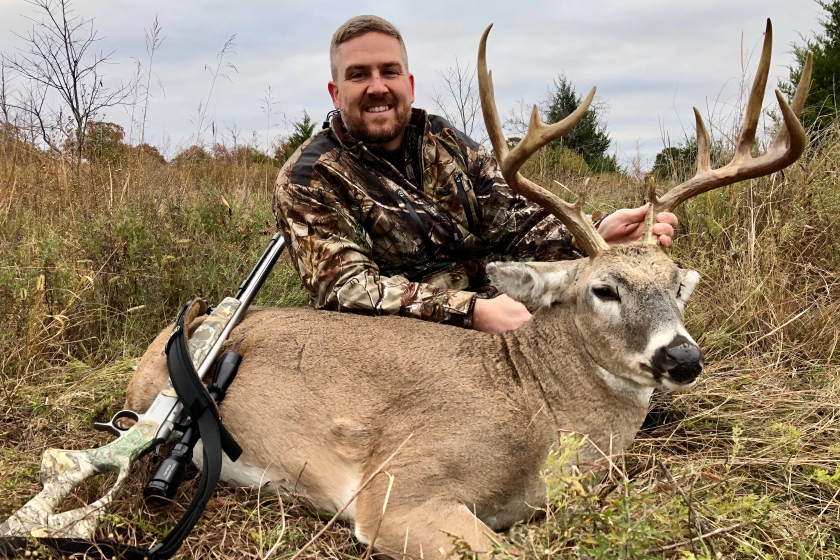 This article was first published in the November 2021 issue of North American Whitetail magazine.

I think about it all year long so it seems like I’d be ready and raring to go when deer season opens, doesn’t it? But I was late again this year. My second job kept me out of the woods until the middle of October and I completely missed the archery opener. I was determined to be ready for Oklahoma’s black powder season, though, so the week before it opened, I conned my brother into helping me get set up. We hung a ladder stand and a trail camera on one property and staked down a ground blind on another, hanging a second camera on a fence line where I’d previously seen deer travel.

Opening morning found me trying to make out just what had happened to that ground blind. It was wrapped around a cedar tree and hanging on for dear life. I sat down in the dark and wondered what to do. Eventually, I figured out that I could unwrap my blind from the cedar, pick it and just set it on top of me. So I did. I opened the blind’s west facing window but things didn’t look right. After a minute or two of reorienting myself with the limited landmarks I had, I decided that I needed to be looking more northwest than due west. I opened that window just in time to see the red glow of my trail camera’s infrared flash.

Something was at my trail camera. The Opening Day optimist in me said it was a Boone and Crockett buck, but after a couple of deep breaths I reminded myself that it could just as easily be a raccoon. As the sun worked its way into the sky, though, I could just make out the body of a deer. I still had no idea if it was a buck or a doe, but it was definitely a deer. Every time I saw the infrared flash of my trail camera, I focused my binocular, trying to make out a rack in the dark. The deer finally lifted its head above the horizon and I caught a silhouette of antlers, tall and wide and glowing white. I started praying for shooting light.

I don’t usually make a habit of checking legal shooting light times, but while waiting for my hunting buddy, JD, to pick me up that morning, I happened to look. I could legally pull the trigger on my muzzleloader at 7:12 AM. Not that I expected to, mind you, but I could. At 7:16 AM, I could see the buck at my trail camera well enough to see that he was getting antsy. He was quartering away hard when my trigger broke. The blind filled with smoke, and I had no clue which direction the buck ran.

I waited thirty minutes, as much to let the sun rise as to give the deer time to die, then slipped down to where the buck had been standing to look for blood. When I didn’t find any, I crawled back in my blind and contemplated my next move. Grid search? Blood dog? A text from JD made the decision for me. He was ready to track. I drove over to his stand to pick him up, and he did a double take as he climbed into the truck.

I had no idea there was blood trickling down my nose but I wasn’t surprised. Trying to gather as much light as possible, I’d had to cheat way up on my scope when I shot.

I led JD to the spot where the deer had been standing, and he couldn’t find blood, either. I told him I’d felt good about the shot – it was only 81 yards when I ranged it – and I really didn’t think I’d missed so we started walking in the direction the buck was facing, looking for track or trail. Turned out, the deer hadn’t gone 50 yards. I knelt down beside him and ran my hands over his horns, then looked back in the direction of my blind. I was surprised to see it standing in plain sight. In fact, if I’d been looking through the blind’s west-facing window, the one I’d originally opened that morning, I could have watched my buck fall.